Latest News Contact Us About Us Careers Nova Ford Customer Reviews
Quote
Get a Quote
Brochures
Request a Brochure
Service
Book a Service
Specials
Special Offers
Test Drive
Book a Test Drive
Our Stock
Our Stock
See something you like? Make an Enquiry 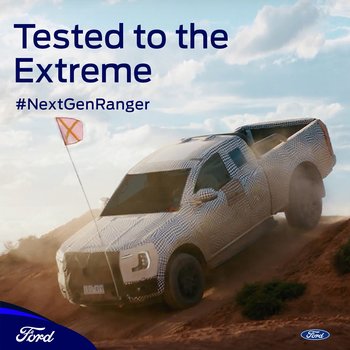 Ford have released the first official glimpse of the #NextGenRanger, which will be revealed later this year ahead of a 2022 launch.

Captured testing in its natural habitat, the Next-Generation Ranger has been designed and engineered in Australia for local conditions and will be the toughest, most capable and most connected Ranger yet developed by Ford.

With superior off-road credentials paired with Ford’s dynamic driving DNA, the Next-Generation Ranger will be the perfect vehicle for work, family, and play. This is not just a Built Ford Tough truck, it is the smartest and most versatile Ranger yet.